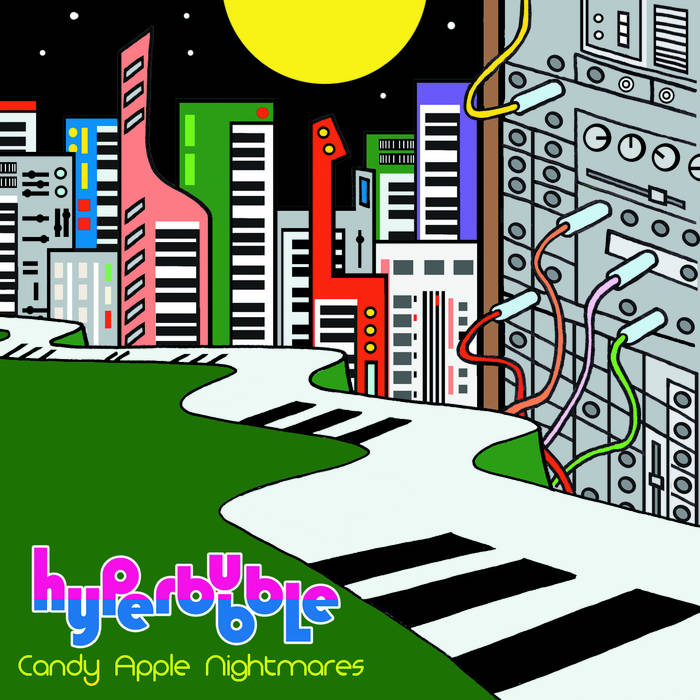 Synthpop superheroes Hyperbubble invited their favorite artists to create an "evil" version of the Candy Apple Daydreams album. These 13 darkwave doppelgangers are hard-hitting, scary, and a lot of fun.


Polarized Mind
Metallic punkoid cybersoul duo, who have been seen fighting their own evil robo-twins in the streets of St Louis (see for yourself on their mySpace page video). Casey made a guest appearance on our second album, or was it her andriod double? Owen's menacing twist on the Candy Apple Daydreams title track features bizarre chord changes over a pulverizing Kraftwerkian beat.


Pouff
Pouff's sneaky remix of Pictures of Paradise is a triple-decker treat of girl-group vocals, stacatto strings, and acrobatic breakbeats. Pouff swiped the original song, threw it into Photoshop, re-animated it, and imported it into his own crazy cartoon world, resulting in something the Pink Panther would seriously dig. Hyperbubble recently returned the favor, christening Pouff's latest track, Doodle Bug Calisthenics.


Stolearm
Stolearm and Hyperbubble have been longtime friends, so we were really happy when the French band bit off a big piece of the Apple and did three remixes from the album! The remix of Supermarket Casanova is hazy and echoey, like a late night cookie-run. The Hyperactive remix is a blast of slamming android rock, and the synth-battle in Moogzilla vs Korgatron is simply apocalyptic


Rocky Controlo
Stolearm is joined on the Supermarket Casanova remix by shock-rocker Rocky Controlo, who's pick up lines, spoken in the language of love, of course, will leave you swooning in the frozen foods section. Freaky photos, music and more can be found on their official mySpace page.


Paisley Babylon
Chicago cinema-psyche group Paisley Babylon's Joe Wallace is a vinyl junkie, photographer, co-writer of the Hyperbubble songs "Vending Machine" and "Mom Dad Unit", as well as an Italian horror film fanatic. When we asked him for an Italo-ambient version of Teddy Bear Crime Wave that was a mix of Golem and Ennio Morricone, he said, "No problemo, bubbles".

Moonrox
Moonrox are from space. Fortunately, they stop by earth from time to time to release albums and deliver other-worldly remixes to worthy earthlings. American disco dancing, Euro synth romancing, and Germanic beat enhancing are the reasons they keep returning to deliver their musical cargo.